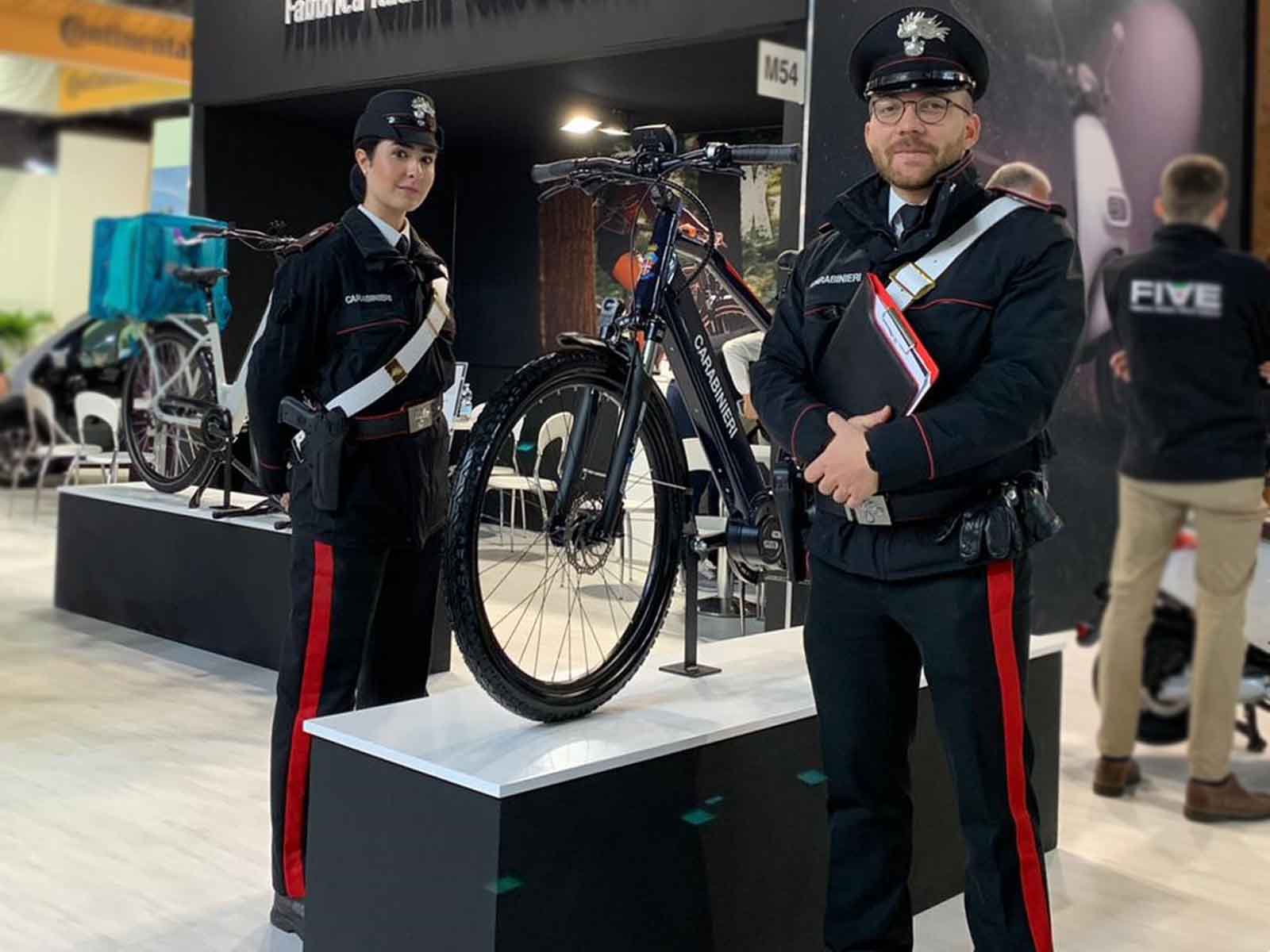 Trekking e-bike are the best solution to ride both in the city and outside on more difficult paths. Therefore, starting from 2023, the Carabinieri Corps (“Arma dei Carabinieri”), the national Italian gendarmerie, will be supplied with a new e-bike fleet.

The Carabinieri Corps General Command decided to introduce on a trial basis e-bikes to carry out the institutional service in different territories, mostly the ones inside the city centers, such as environmental and cultural heritage protection, monitoring of tourist paths and pedestrian areas. During their service, the e-bikes shall carry out the same assignments as the one of motor vehicles.

During EICMA 2022 in Milan, FIVE revealed to the public the new e-bike specifically designed for the Carabinieri Corps, based on the Travel Adventure model by ITALWIN, a fast, safe and well-equipped e-bike.

Travel Adventure is feature-rich to challenge any type of road, from paved road to city center cobblestone or bumpy paths, thanks to the second-generation central engine FIVE F90, the 63mm Suntour front suspended and lockable fork and the front and rear hydraulic disk brakes.
The e-bike fleet will be used both in seaside cities like Ravenna and inland towns like Sorano (province of Grosseto), where the height difference in the territory can reach 900 meters

The livery of the hydroformed aluminum frame is customized with the institutional Lord Blue color and red insert as a reference to the ordinary Carabinieri uniform. The e-bike will be manufactured in FIVE’s factory located in Bologna, an energetically self-sufficient building, which self-produces the energy through a dual photovoltaic system.

At EICMA the model met a high consensus from the public and the Italian Infrastructures and Sustainable Mobility Matteo Salvini came by too to check it out and to congratulate FIVE.
The General Command assigned for the entire 6-day Exhibition some Carabinieri agents to represent the Corp near their new e-bike.

The collaboration between FIVE and the Carabinieri started in 2020, when 60 Trail Ultra e-bikes were supplied to the “Benemerita”. The ITALWIN Trekking model received so excellent feedback, as to decide to enrich the fleet with new vehicles.

Major success for Italwin at EICMA 2022

Italwin at EICMA, an edition full of news

ITALWIN takes part in the Italian Bike Festival in Misano

Italwin ebikes will be at Eurobike!

Major success for Italwin at EICMA 2022